Under the Pastoral care of Rusty Williams, Alpharetta’s Children’s Ministry Co-Directors, Kelly Mosley and Kellie Nunley, led 43 children and 27 adult volunteers through this year’s Vacation Bible School with the theme of gearing up for life’s Big Game. 2 Peter 1:3On the first night of this year’s program children, personally decorated their collection cans with phrases like “Give Haiti Hope”, “Get your hands in the game”, and “Whatever you do for one of the least of these …”. The cans were taken home and used all week to collect donations for the work The Beehive International, Inc. is doing in Haiti. $830.50 is on its way to our country mission in Bohoc! How thankful we are to the Alpharetta Church for their continuing support!

In addition to the collected funds, The Alpharetta Church donated all of their VBS props, t-shirts, games, delicious treats and decorations so the Beehive team can recreate this programming in Haiti.  We have already chosen the orphanage supported by our dear Canadian friend, Mike Parenteau, to be the recipient of all of these goods. Mike works tirelessly in Haiti to foster a better life for these children who really are in desperate need. The Beehive wants to help him make a difference and will conduct the Alpharetta Church’s VBS program there.

Many continue to sacrifice to help the “least of these”. Kelly reports the example of two brothers – ages 7 and 4 – who emptied their piggy banks for the children of Haiti. What an example our own children can be to us of selflessness.

Kelly stated: “VBS is always fun and exciting, but this year had a special feeling to it that I can’t put into words. It was pure… if that makes sense. All the volunteers clicked well together and were clearly focused on the same goal (the gospel) all the while with a happy heart. Like I said, the kids were so full of joy and so were the volunteers! Very special week!“

VBS Program Goes All the Way to Haiti 2017 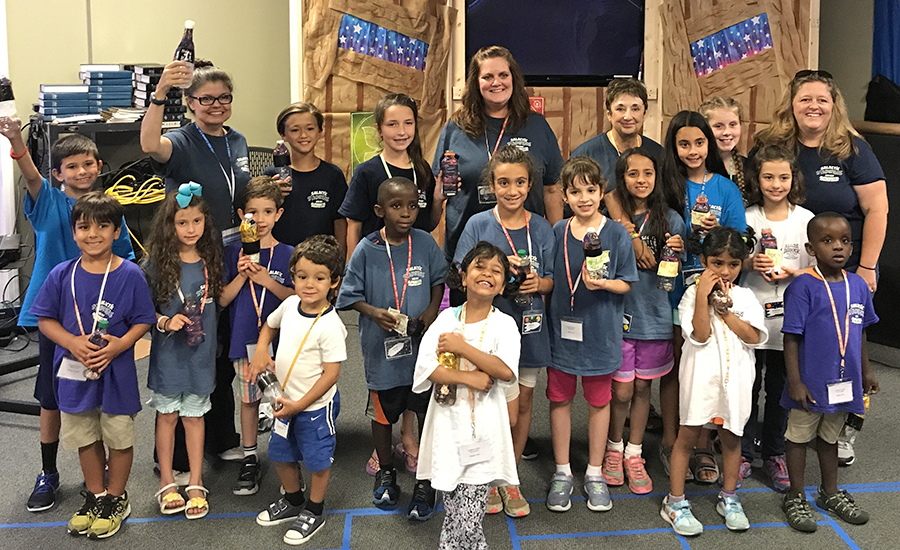 Seventy-three children and thirty-eight volunteers became Galactic Starveyors as the Alpharetta Adventist Church conducted its annual Vacation Bible School June 19-23. Because of the generosity of Alpharetta’s members this year’s program will be reproduced in Canaran, Haiti, for an orphanage operated by The Beehive International, Inc. In November of this year members of the Alpharetta Church will travel to Haiti to help The Beehive with their community service programs, construction, and teach this very VBS program at Mexny’s orphanage of 14 boys and girls. Alpharetta has not only donated the needed supplies but also raised $515.00, through a “rocket ship” coin collection craft. These funds will build three screened windows for Mexny’s kids and Alpharetta representatives will have the honor of putting them into place.
This is the second year in a row Alpharetta has reached out to the Beehive International. Director of International Development for The Beehive, Jonathan Euler, states, “Alpharetta Church has been donating very needed medical supplies and funds to support the work we are doing in Haiti. My first mission trip was actually under the direction of their Pastor Rusty Williams over ten years ago.”

Kelly Mosley, director of this year’s VBS program at Alpharetta states, “To me, VBS is the ultimate evangelistic program. Statistics show that kids ages 5-12 are more likely to accept Jesus as their Savior than any other time in their life. I personally experienced this as a child who attended VBS with my cousins a few summers in a row. That’s all the Jesus I got for the whole year! I did not come to have a relationship with Jesus and accept him as my Savior until I was an adult and I know without a doubt my time at VBS had a big part in my decision.”

Pastor Williams adds, “It is so gratifying to work with a church family that places so much value on kids having fun and learning about Jesus through our VBS program as well as Pathfinders and dynamic Sabbath School Departments. The fact that the program can overflow all the way to Haiti is incredible!”