This March, a group of students and staff from Southern Adventist University had a great opportunity to take in and help out with the great work going on in Haiti by the Beehive International. While there, SAU poured the foundation for a kitchen building, saw over 300 local people in a medical clinic, and put on a nightly VBS for the kids. The sponsors for this trip included staff from the SAU School of Nursing, as well as help from nearby Lee University and other outside sources. The 20 students, headed by Evelyn Ruiz, included many Nursing and Bio-Chem majors, as well as other assorted studies mixed in.

After leaving early on a Thursday morning, the group had a bus ride to Atlanta, followed by a short flight into Port Au Prince and a 3.5 hour bus ride over the mountains to arrive in Bohoc, Haiti. The Pearl, The Beehive International’s country location, is a growing vocational school and orchard where locals are employed and educated in skills that will help them in logical ways such as construction and farming. While there, the group worked hard to develop the campus, serve the local people, and spread awareness of the Beehive’s mission.

The group worked hard during each of the six work days that they were there. During the day, duties were divided between the medical clinic and the construction site. The medical clinic saw approximately 300 local patients and served their needs of anything ranging from dehydration to malnutrition to physical wounds. While the clinic workers were sitting in the shade, the construction crew was out in the sun working hard to get the foundation going for the new kitchen building that would not only relieve a lot of the stress of having no real place to prepare meals for groups and locals, but give The Beehive a place to add cooking to their growing list of skills being taught at the Bohoc Campus. By the time the group was ready to pack up and leave, the foundation of the kitchen was completed, and as many patients had been seen as supplies would allow.

Each day after work, the students put on a VBS program for the local kids. Through the help of a translator and improve acting skills, the kids were taught Bible stories that pointed them toward Jesus. Crafts and games afterwards gave the students a chance to bond with the kids and hopefully leave a lasting impact on them. The sheer happiness of the kids not only when they were being given things and taught new games, but in their everyday lives, was shocking to nearly everyone involved. “It’s so great to see how happy everyone is.” said Kyrie King, one of the students who went on the trip. “It just isn’t something you really find in the US. They are happy when we as Americans see no reason for them to be.” Happiness just because is one of the things students were taught, and a thing that will surely be remembered and applied to their everyday lives. 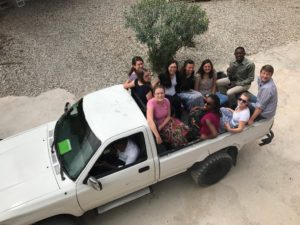 After a week of hard work, the group enjoyed spending a fun day on a beach resort in Port Au Prince before heading to The Beehive’s compound in Carrefour, where they teach woodworking, creating items that they sell to help support themselves. On Saturday the group got to take in a local church service, as well as tour the Adventist hospital and university, and spend some time at a local orphanage, once again being taken aback by the true happiness of children who literally have nothing by American standards.

Overall, it was a tiring yet great experience. There were of course low points during the trip, but there were also highs. Everyone learned something themselves, and some students are still working to spread awareness while planning future trips to The Beehive.

“I enjoyed the Haiti trip a lot. At first glance it seemed like the work we did there was insignificant and we really weren’t needed. And maybe this is true to an extent. But the lasting impact comes from how it has affected my life personally. I have learned to look at things through a different light, where the good is brought out and trumps the bad. That, and the realization that the work The Beehive is doing in Haiti is impacting lives to such a great extent has led me to plan, recruit for, and fundraise for a fast approaching trip back where we will be pouring finished floors in the guesthouse and figuring out how we can help on a larger scale in the future. The work that I as an individual am doing is small and insignificant, but the way it helps an organization with such a beautiful mission makes every moment worthwhile.” 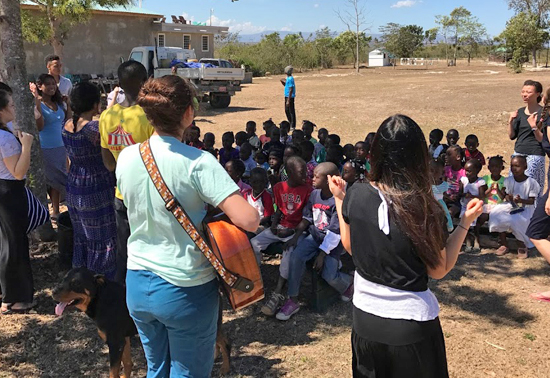