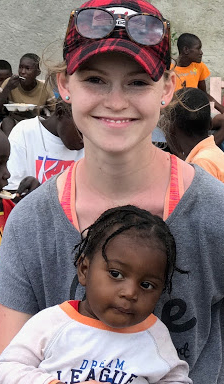 In March I visited Haiti for the first time and had my first experience working with Beehive International. I was traveling with four other people and we spent five days at the Beehive. I walked off the airplane in Haiti’s capital not knowing what to expect or what my time at the Beehive would be like. The first thing that impacted me was the large numbers of children who were begging in the streets. We would be stopped for a second and they would crowd around our car and reach their hands inside the open windows to ask for money. This was so hard for me to watch, but I knew that if I gave money to one of them they would all swamp the car, so I had been told not to give anything to any of them.

Most of our time was spent at the Beehive’s country location called The Pearl, which is about three hours north east of Port Au Prince in the central plateau. It was a beautiful drive over the mountains, through little villages and past a few lakes. Unfortunately, the Haitians have cut down most of the trees causing the topsoil to wash down into people’s houses and gardens during the hurricane in October of 2016. This left the central plateau one of the poorest parts of Haiti. Only five percent of the roads in Haiti are paved and the ones that have been paved are in very bad repair. Almost all of the roads to the Beehive are dirt and are all very bumpy, but we really didn’t mind because that was just part of the experience!

We finally reached The Pearl! It is hard to express my emotions as we drove up the driveway and up to the guest house. I was so excited! The moment I had been imagining and waiting for had finally arrived! We climbed out of the car and walked into the big guest house just as the two groups who were there were finishing lunch. We were warmly greeted by Jonathan Euler,  founder and director of the Beehive. We were given dishes and told to help ourselves to the food spread out on a table at one end of the room. That was the first of many incredible healthy, delicious meals we ate during our stay in Haiti!

After we had finished eating, we reported to Jonathan for our first assignment, which was fixing and reinforcing the chicken coop and building a feeder for the chickens so that they would not waste as much food. The next day we started our next project which was cutting all of the pieces of rebar off of the roof on the guest house so that the rebar could be used to build the fence posts that were being made for the kitchen garden. The guest house is still a work in progress, which happens at the rate that donations for the guest house come in. The house is definitely livable now, but not quite to the point at which most people in the U.S. would consider it finished. The project that was in full swing while we were there was the kitchen and kitchen garden. That project is close to being finished now but more funds are needed to finish it up, so that the wonderful kitchen crew can prepare meals for up to 80 people in a real kitchen instead of over an open fire!

Earlier I mentioned that there were two other groups there at the Beehive when we arrived. One group was from Andrews University in Michigan, and the other was from the Lodi Seventh-Day Adventist Church in California. They were working primarily on the kitchen, kitchen garden, Vacation Bible School and medical clinic. It was fun to see how far they had come on their projects at the end of each day! Every evening Andrews University hosted Vacation Bible School for the kids in the neighborhood. The kids had so much fun and never wanted to leave when VBS had finished for the day! We were able to spend some time with the kids playing games, eating, and singing. When they sang, the children’s enthusiasm was evident. They were so excited to spend time with us, it melted my heart! Another important thing that both Andrews and Lodi did together was medical work. There is no real hospital or medical clinic for miles and in many areas of Haiti the mortality rate is very high. In the future the Beehive hopes to purchase a piece of land nearby and build a medical clinic so that the nearby people can access to the medical care they need. Before that happens though they need to finish the guest house so that the medical teams who come have a place to stay. These are both very important and necessary projects that will help save lives and bring the Word of God to the people of Haiti, whose primary religion is Voodoo. The Kitchen is also a very important project that will help feed not only the people visiting, but the people who live nearby as well! It so intrigued me to see how cleverly the kitchen was designed so that not a single resource would be wasted. For example, the water in the sinks is drained into the garden to water the vegetables growing there!

During my time in Haiti I was given new eyes, eyes that saw a totally different world when I returned home to the U.S. I looked at this new world realizing how blessed I am and that I take so many things for granted like fresh water, constant electricity, and gas burning stoves. Also being away from the world of social media, where we live with our heads buried in our phones, laptops, and iPads, was like a breath of fresh air. The country was busy but I felt peace; I was tired, but somehow I felt rest, I had nothing to be stressed about and I could wake up every morning and spend time with God alone with no distractions, just peace. This feeling of peace has been hard for me to find when I am at home because I have a million things going through my head to stress about and plan for. But that peace is something that has stayed with me even after returning home.

I love Haiti. It will always have a piece of my heart, no matter where I am. My time at the Beehive was something that was truly unique! I have been on mission trips before but this one was by far the most special to me. Jonathan has a way of finding out exactly what each person is good at and how they can help in the most effective way while there. He is enthusiastic about any new ideas and is always looking for ways to help more people both Haitians and visitors. This will be a trip I will never forget. It changed my perspective on life and helped me to be more thankful for the many things I have been blessed with!

May the Lord richly bless you!

Katherine Frykman is 16 years old, just finished her junior year of high school at Dikaios Christian Academy in CA, and plans on a future in nursing.

40 “The King will reply, ‘truly I tell you, whatever you did for one of the least of these brothers and sisters of mine, you did for me.’